Our very own Sir Clare Roberts, KCN, QC,  was in St. Kitts and Nevis to meet with stakeholders in the field of labour as efforts to reform labour administration gain momentum.

Below is a section from the article published in St. Kitts and Nevis Observer. 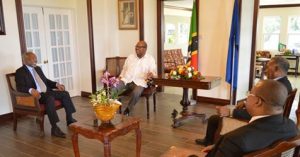 the following morning, paying courtesy calls on Governor-General His Excellency Sir S. W. Tapley Seaton at Government House, as well as Senior Minister and Minister of Labour the Honourable Vance Amory at Government Headquarters. Later that day, Sir Clare had his first working meeting with union officials, who represent workers across various fields in the twin-island federation.

Thursday’s agenda included meetings with employer representatives as well as public sector officials, while today is marked by discussions with a wide group of stakeholders. Permanent Secretary in the Ministry of Labour Ron Dublin-Collins noted that the arrival of Sir Clare as a consultant marks another milestone in the government’s labour reform agenda.

“At this stage, it means that our agenda is well underway to become a reality in terms of [establishing] a new labour code,” he stated, adding that numerous consultations have been held with members of the National Tripartite Committee and other partners. “Over the past 12 or so months, we have advanced our discussions, moved the agenda forward, and it has resulted in a decision to have this consultant.”

Click on the attached link to view the entire article:   http://www.thestkittsnevisobserver.com/local-news/sir-clare-roberts-assisting-st-kitts-and-nevis-to-draft-new-labour-code/

info@nullrobertscolaw.com
I am ready to meet with an attorney.